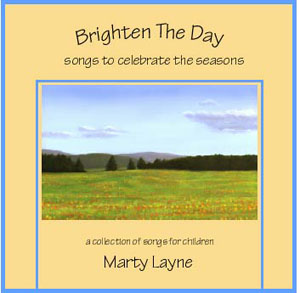 PDF booklet of all the words to the songs
Download Brighten the Day $10.00 CAD

Do you have young children?
Then join the many families who’ve been delighted by the songs on Brighten the Day – songs to celebrate the seasons.

Let me brighten your day and entertain the little ones in your household with music that is calm and easy on the ears. This recording brings everyone back to the slower pace of childhood, when the changing of the seasons is a big event and a day spent outside on the beach is filled with delight and surprises. My children grew up listening to and singing these songs. Now my grandchildren enjoy them, too.

Listen to clips from the CD All of this song

“With her warm mellow voice, accompanied by her acoustic guitar, Marty sings a collection of songs for children, some well-known and loved, others traditional European folk songs or catchy tunes which will become family favorites. This is a happy, joyful recording…”

How did you choose the songs for the CD?

Music/singing is as much a part of my life as breathing. My mother sang to me when I was a baby. When my family immigrated to the USA in 1956, my mother missed the music that was part of the everyday culture in Holland. So she did what she could and sang with my brother, sister, and me at home and encouraged us to learn to play musical instruments.

I was 8 years old when we left Holland. Music was one of the things that helped me make the transition to my new world. One of the first English songs I remember learning was Over the Meadows in music class at Lincoln School in third grade with Miss Lincoln, our music teacher. In fact, most of my memories of that transition time from one language and culture to another involve the songs I learned.

My mom passed on her love and appreciation of music to my siblings and me. I passed this on to my children. We sang together in the car, at home, and sometimes as we walked outside. Now I have a grandson and I sing with him, just as I remember my mom singing with my children – a full circle. I hope that you, too, will be inspired to sing to and with the children in your life. It’s fun! and it creates wonderful memories!

Since releasing this recording, I’ve written a children’s book, Autumn Stories, based on the song Hurry, Hurry, Hurry, Hurry. It’s available as a PDF download picture book, a nature based story about the coming of autumn and how animals get ready for winter.

How did you choose the song selections for your CD?

I had so many favorites, it was hard to choose. I decided to focus on the changing seasons. I wanted to record songs that had not received a lot of exposure. Each member of my family helped by telling me which songs they had particularly liked when they were young. I recorded the songs in two takes in June of 2000.

Notes about  the songs:

Sing A Song Of Spring A delightful song that describes the call of the outside world when the “green buds show.”

The Spring Medley is a collection of rain songs and was fun to put together  I Hear Thunder is an adaptation of Frere Jacques that I learned from the book This Little Puffin by Elizabeth Mary Matterson.  It’s Raining is a loose translation of a song I learned when I was a young child in Holland.

The Winter Now Is Over we enjoyed singing because of its great echo refrain – “Cuckoo, Cuckoo, Oh can’t you hear it, too? I thought I heard this morning, the cuckoo’s song at last?”  And even though I live in Victoria, BC where our winters are mild, I do feel like singing when “The winter now is over!”

It Is A Happy Morning helps me to remember to focus on the beauties of the world around me and to remember that there is a bigger world than the one inside my house.

Tadpoles and Salamanders by Marcia Berman brings back memories of the many days we spent as a family at a local lake swimming and playing outdoors all day long, looking at dragonflies, minnows, crayfish, etc.

I sung Wind, Wind, Blowing as a lullaby for many years. My children usually fell asleep before I got through the song twice.  I always wanted to sing it as a round, and with recording technology, I did. That was fun!

Hurry, Hurry, Hurry, Hurry is one of my favorite songs partly because the song itself is so much fun to sing. It starts out slowly and speeds up as it goes along to fit with the words. The words describe the different ways the four animals sense winter coming and it tickles my fancy; who can resist – “Hurry, hurry, hurry, hurry, we must all get fat and furry.” I have wonderful memories of singing this song in the car with my children as we drove around doing errands. This song was also a favorite in the fall in my parent and baby music classes. And most recently, I based one of the stories in Autumn Stories, my children’s picture book, on it.


My daughter used to sing Winter Walk with me frequently when she was younger. It was one of her favorites.

Remember, if you can speak, you can sing!

Contact me  – info @ martylayne  .com  (remove all spaces). I look forward to hearing from you.